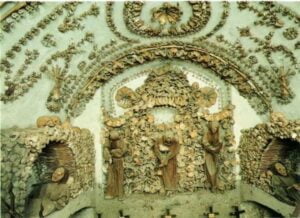 With Halloween approaching, I thought I’d blog about a few of the eeriest places I’ve visited over the years. Without a doubt, the Capuchin Cemetery in Rome, Italy, takes the dubious honor.

You’ll find the cemetery, actually a crypt beneath the church of Santa Maria della Concezione dei Cappuccini (Immaculate Conception), on the Via Veneto near Palazzo Barbareni. The ghastly chamber reeks with decay and is divided into five tiny chapels linked via a dim passageway. The place is so weird, even Dan Browne skipped a mention in his book, Angels and Demons.

Within lies the final resting place for over 4,000 Capuchin friars who died between 1528 and 1870. Some were first buried elsewhere and then transferred here. The soil in the crypt was brought from Jerusalem. A few dozen skeletons remain intact, draped in hooded Franciscan habits. Large numbers of bones adorn the walls in complex decorative patterns; some resemble bas-reliefs, others hang from the ceiling as working light fixtures. One chapel overflows with countless leg bones and skulls. 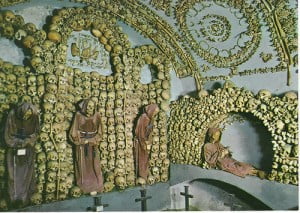 The first room, known as the Crypt of the Resurrection, features a picture of Jesus raising Lazarus from the dead, framed by parts of a human skeleton. Visitors are encouraged to interpret the displays of funereal art as the Christian belief in resurrection and everlasting life.

A plaque in one of the chapels reads, in three languages, “What you are now, we once were; what we are now, you shall be.”

I honestly can’t describe the macabre, grotesque effect, albeit with a certain artistic merit. The unearthed skeletal array makes this sacred shrine more a ghoulish tourist attraction. One needs only a few minutes to see the place, if at all.

We left Langdon and Vittoria racing along the pasetto (corridor) from Castle Sant’Angelo to St Peter’s Basilica. Our story now picks up speed, makes confusing turns and exposes a few devilish surprises, as it nears the climax.

I won’t try to summarize or give away the plot; you simply must read the book or go to the movie. But, let’s just say, both versions lead to our next site. We venture deep below the Vatican– to the Necropolis .

Most visitors to Rome, and many residents, have no knowledge of the hidden city lying two stories below the main altar. Ancient mausoleums were not uncovered until 1939 when Pope Pius XII ordered a secret archeological dig. He hoped to find St. Peter’s grave . The result of their discoveries was not publicly announced until decades later.

I learned of the Vatican Scavi (necropolis) tour while researching my 2008 trip to Italy, and applied for tickets. Only 150-200 people per day are permitted into the tombs. Tickets costs just ten euro, but must be requested months ahead.

The morning I arrived at St Peters, I stopped a priest to ask for directions to the meeting point. I showed him my confirmation letter and he looked at me, smiled; then said, “You are blessed.”

And I was. To stand in the most sacred space in Rome is incredibly powerful.

I wrote a descriptive article about the Scavi tour, recently published by Bootsnall.com. I hope you will use this link to read the details of the search for St. Peter’s tomb .

This photo was NOT taken in the Vatican Scavi, it is a photo of catacombs.


Please follow this link to my article on the Scavi Excavations tour which is online at www.Bootsnall.com

… wander and wonder are probably the same word.

If her suitcase could talk...