Took three trips to Paris for me to finally get into Sainte Chapelle (sant-shah-pel’), but worth the wait. This chapel is one of the most glorious places I’ve ever seen.

Sainte-Chapelle lies in the courtyard of the former royal palace on the Île de la Cité (Central Paris). Since I stayed in a center city hotel, I could easily walk.  First I stopped outside Notre Dame to stare at the gargoyles. Just loved those medieval rain gutters!

On I walked to the Palace of Justice complex. Here, King Louis IX, later Saint Louis,  commissioned and built Sainte-Chapelle  (Holy Chapel) from 1246-1248. This became his personal church used to house his precious relics including Christ’s Crown of Thorns and the True Cross. He purchased these from the Emperor of Constantinople for the exorbitant sum of 135,000 livres. To compare, the cost of erecting the entire building was 40,000 livres.  Only on Good Friday were the treasures were exhibited to the public.

I waited in line about 15 minutes, then passed through a security check. I leaned backwards to see the top of the steeple. Then I strolled around to enter the lower chapel or parish church used by non-royals who worked within the palace. The arched ceiling supports the king’s upper sanctuary and glows with gold paint between a starry sky. A statue of the Virgin Mary dominates the church to whom it is dedicated.

In the corner lies the entrance to a narrow winding staircase which leads to the magnificent upper chapel.  Even though visitors expect to see the best stained glass of its type in the world, almost everyone entering drops their jaw in a gasp.  The translucent reflections of colored light and golden hues beam down and surround in rare beauty. The wall of windows soar to great heights producing a twinkling ambiance of tranquil light. A 15th century rose window adds some contrast. Benches allow people to sit and meditate or read the biblical story told in the window panes.

An amazing two-thirds of the predominantly blue and red stained glass is authentic. The others were created by artisans during a painstaking twenty year restoration begun in 1840.  The building suffered during the French Revolution. Fortunately, the chapel was converted to an administrative office and the windows were largely obscured, which likely saved them. They were removed briefly during the early 19th century and again during World War II to protect them from harm. They were painstakingly reinstalled after the war.

As for the prestigious relics, they disappeared or were melted down with the reliquary. Well… some prefer to believe they mysteriously survived and are saved as the “relics of Sainte-Chapelle” stored at Notre Dame. Of course, it seems  if all the pieces of the cross displayed in Catholic churches were assembled together, we might have a forest. Fraudulent relics aside, Sainte-Chapelle is a Parisian must-see.

I highly recommend choosing one of the hotels in Paris city centre for ease of visiting the Louvre, Notre Dame and Sainte- Chapelle.

She hiked a trail in the Smoky Mountains, descended into Forbidden Caverns and strolled the Champs ElysÃ©es. She was drenched by the swirling StormChaser and snoozed on a bed at 35,000 feet. She discovered the wonders of the medieval Papal Palace in Avignon and Sainte Chapelle in Paris built by French King Louis IX to display Christ's crown of thorns.

She savored apple fritters in a restaurant encircled by orchards, French croissants still warm from the oven and barbequed ribs that were finger licking good. She lingered at sidewalk cafÃ©s tasting escargot and pÃ¢tÃ© and sipped robust Chateauneuf du Pape wine. She drank beer in Munich's famous Hofbrahaus where she met a complete stranger from her hometown. 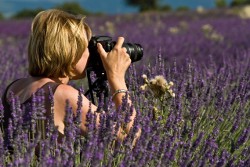 It was a month on the move and Mimi is tired. She's glad to be home to watch fireworks and celebrate the Fourth of July. In upcoming blog posts she will share her recommendations on hotels, restaurants, activities, places of interest and compelling reasons to visit.

Photo of Mimi (AKA Debi) in the field of lavender by Susan Bowen.

...wander and wonder are probably the same word.

If her suitcase could talk…

If you know me, you know I love a Pisco sour. I fo